2-way Radios: Why Businesses Still Prefer Them and Why You Should Know What Ingress Protection (IP) Ratings Are Before You Buy One 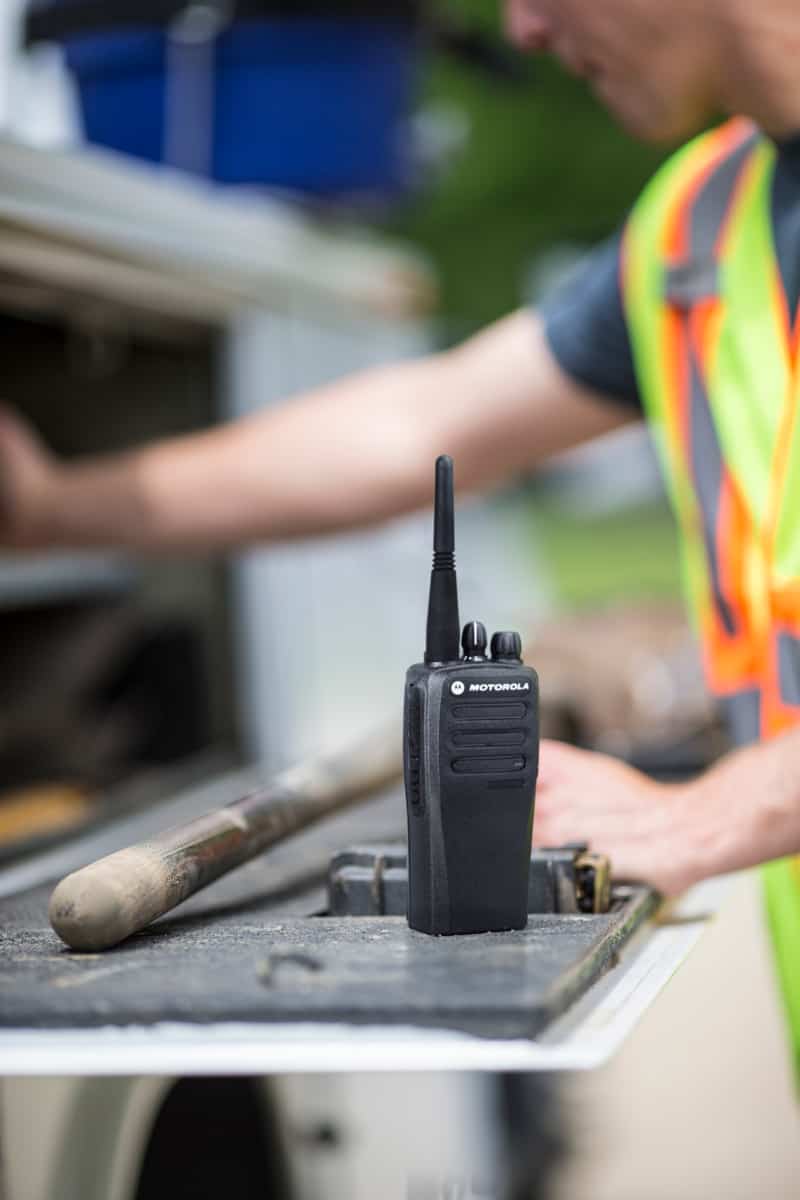 2-way Radios? In this day and age? While many may assume that smartphones are the natural go-to for communication purposes, curiously enough, many businesses still opt to use 2-way radios. While that may strike some as odd, there are actually quite a few compelling reasons as to why they’re still hot in demand in the world of business.

With that said, we’ll be going through five major advantages (amongst many others) of using 2-way radios, but before that, let’s first talk about the equally important topic of what Ingress Protection (IP) ratings are.

What Exactly Are IP Ratings?

Ingress Protection (IP) ratings are a standard that defines how well electrical enclosures are sealed against foreign objects (dust, dirt, sand) and moisture. Since different equipment requires different levels of protection, it’s encouraged that you, as a buyer, become familiar with what the ratings mean.

How Do I Read an IP Rating?

IP ratings follow a two-digit grading system, and each digit stands for different levels of protection against intrusions (solids) and moisture. The first digit represents protection against solid matter while the second shows how well the equipment can deal with moisture.

After looking through the two tables above, you should now have a rather good grasp of how to read IP ratings. With that said, let’s have a look at a few of Attache’s high-quality and durable products, just to see how well protected they are against the elements.

1.      PMNN4489 – Boasting an IP rating of IP68 and made using well-trusted IMPRES technology, you can enjoy extended talk time with the PMNN4489 without having to worry about accidentally getting it into contact with dust, small particles, or even water. After all, just by looking at the charts, you can see that both 6 (completely dust tight) and 8 (protection against prolonged effects of immersion under pressure) are the highest forms of protection against both solids and moisture. This battery truly is the sturdiest of the sturdy!

2.      PMNN4502 – While the PMNN4502 shares an IP rating of 68 as well (you can’t really further perfect perfection), note that it is compatible with different models compared to the PMNN4489. With that said, though you can rest assured that Attache’s products are well protected, you should always double-check to see if you’ve bought the right batteries for your 2-way radio (if you’re getting a new battery).

1.      NNTN8359 – Moving on to items that have an IP of 67, the NNTN8359 was created with long battery life in mind. Being a Smart Energy battery, this product can be charged at least 150 more times compared to standard batteries. With that said, folks looking to save up on battery costs should definitely invest in this.

However, note that you should only use Motorola-approved batteries with this product. Using other batteries may lead to the product being unsafe when used in hazardous environments.

Regardless, though the 7 (protection against temporary immersion) signifies that the battery isn’t capable of remaining immersed underwater for long, the NNTN8359 is still extremely viable outdoors as long as you don’t use it for too long in the rain or while diving.

2.      PMMN4094 – Last on the list, is the PMMN4094, an active noise cancelling remote speaker microphone. Though it may sound like a mouthful, the name isn’t just for show. With this accessory, you’ll be able to communicate clearly in the harshest environments, be it within noisy oil refineries or when you’re in the midst of fighting a fire. With a similar IP rating to the previous product, you won’t be needing to worry about the accessory getting ruined by the environment any time soon either.

Why Do I Need to Know All This?

Which IP rating you need largely depends on the conditions you use your equipment in. For example, you don’t really need a piece of equipment with a high IP rating if you’re mostly working indoors. After all, there is less risk of dirt and moisture getting into contact with your equipment.

However, that also means that if you work in outdoor fields such as utilities, oil and gas, and construction (which will put your equipment at risk of getting into contact with solid intrusions and moisture), it’s best to have equipment with a higher IP rating on you.

Now that you’re an IP rating expert, you should know how high or low the IP rating of your new 2-way radio should be. With that out of the way, let’s proceed with our initial topic.

With exorbitant initial prices alongside high monthly bills, it’s no mystery why businesses reject using smart phones. On the other hand, when it comes to 2-way radios, you only need to pay upfront once, and the payment includes the cost of the battery and its charger. Adding in the fact that most 2-way radios offer extensive warranties, it’s quite obvious that 2-way radios are the more affordable option between the two by a long shot.

Much Sturdier, and Heavy-Duty Options are Available

Speaking of being cost-effective, you won’t need to worry too much about having to buy a new 2-way radio just because it falls on the ground, or you accidentally expose it to dirt or moisture (as long as you have the appropriate IP rating). Unlike smartphones, 2-way radios are designed to be more rugged, and many of them come with an array of IP Ratings to specify which 2-way radio suits your work environment best.

While smartphones are connected through satellite towers, 2-way radios make use of their own airwaves. In other words, your 2-way radio will work just fine within areas with zero signal or poor reception. It also means that you won’t need to share satellite towers with millions of other people during peak hour, making a 2-way radio’s coverage far more reliable.

Though your newest smartphone battery may drain like no tomorrow, 2-way radios today are lasting longer than ever, with some models boasting a full 24 hours of use between charges. What more, with a radio, you can easily just swap dead batteries out for fully charged ones instead of having to charge the entire device.

While we’re on the topic, let’s take a moment to talk about IMPRES batteries. When used with an IMPRES charger, IMPRES batteries are capable of providing automatic, adaptive reconditioning, end-of-life display, and other advanced features.

Aside from that, the data stored within the IMPRES-sive batteries are communicated to the charger via a unique IMPRES communication protocol, a protocol that was designed with maximized talk time and optimized battery cycle life in mind. With that said, Attache’s batteries utilize this technology, and below are a few examples of them.

1.      PMNN4491 – Despite being the most cost-effective among these three examples, this battery boasts an IP rating of 68. In other words, in addition to the previously mentioned benefits of IMPRES batteries, the PMNN4491 is capable of being submerged to up to two meters for over two hours!

2.      PMNN4493 – Being a 3000 mAh, low-voltage battery, the PMNN4493 easily provides you with over 25 hours of talk time when used with the compatible MOTOTRBO Enhanced Series Radios. Also with an IP68 rating, this IMPRES battery shares all the benefits that the PMNN4491 has.

3.      PMNN4488 – Having an IP rating of 1P68 (ATTACHE really means business with its IMPRES batteries), the PMNN4488 mostly shares all the aforementioned benefits, the only difference being that this battery is only able to remain submerged to up to one meter for at most half an hour. Even so, this battery still stands out since it is designed specifically for the Silent Alert Belt Clip (PMLN7296). With it, you’ll never miss any incoming communication ever again, no matter how loud your surroundings are.

It may not apply to some of you, but for those working in noisy environments (e.g. events, manufacturing, and construction sites), it can be exceedingly difficult to communicate effectively through a smartphone. Thankfully, 2-way radios are designed to tackle this issue, and noise-cancelling accessories can be added to further block any remaining background noise.

Putting accessories aside for a while, since we’ve already talked about IMPRES batteries, it wouldn’t be fair to leave IMPRES Audio out.

IMPRES Audio has the advanced feature of Intelligent Audio. In layman’s terms, that means that it allows 2-way radios to automatically adjust their volume depending on the noise in the background. Though that may not sound like much at first glance, it essentially means that IMPRES Audio will ensure that you hear all your calls clearly. A blaring siren or someone holding the mic too close to their face isn’t going to be a hindrance anymore with IMPRES Audio around!

It should also be mentioned that IMPRES Audio works hand in hand with Attache’s digital 2-way radios. Compared to analog 2-way radios, digital ones are superior for several reasons. For one, speech is digitally-encoded, which means that voice clarity is maintained even in the most extreme conditions.

Aside from that, digital 2-way radios also perform better than analog ones when it comes to coverage. Built-in error correction helps eliminate any static and voice distortions that commonly happen with analog radios once you reach the limits of coverage. Together with IMPRES Audio, voice clarity won’t ever be an issue again.

Now that all that’s explained, let’s have a look at a few of ATTACHE’s noise-cancelling accessories.

1.      PMNN4050 – Having all the previously mentioned noise-cancelling benefits of IMPRES Audio, this accessory conveniently clips to your shirt pocket or lapel, enabling easy communication without having to remove your radio from your belt. Even with gloves on, operating it is made easy due to the PMMN4050’s large microphone. There’s also an available audio jack that earpieces can be attached to for more discreet communication.

2.      PMMN4071 – Mostly similar in design to the previous entry, the PMMN4071 can be clipped onto your shirt pocket/lapel, is easy to operate even with gloves on, and has an audio jack available for discreet communication. However, aside from the noise-cancelling benefits of IMPRES Audio, this speaker can also notably get up to 50% louder than the XTS Series remote speaker microphones, making it a much better candidate when it comes to voice clarity.

1.      PMLN7465 – Heavy-duty, optimized, and certified to meet the performance of your Attache 2-way radio, these headsets will not only protect your ears, but also improve your communication in the loudest of environments!

2.      PMLN6853 – Designed with industrial users working in extremely loud environments in mind, these headsets have a Noise Reduction Rating of 24 dB, allowing the workers’ hearing to be protected at all times.

Aside from having a ‘behind-the-head’ style that allows them to fit under most helmets, the addition of soft gel ear seals means that this headset can remain comfortably on your head, even after extended periods of time.  It even has a push-to-talk feature that’s located on the earmuff, making it easily accessible even for those wearing gloves.

To top it all off, having dual-ear speakers and a noise-cancelling boom microphone allows this headset to deliver superior receive and transmit audio.

Now that you know all this, perhaps consider getting 2-way radios for your workplace. With the proper IP rating for the job and all those advantages, productivity will surely soar.